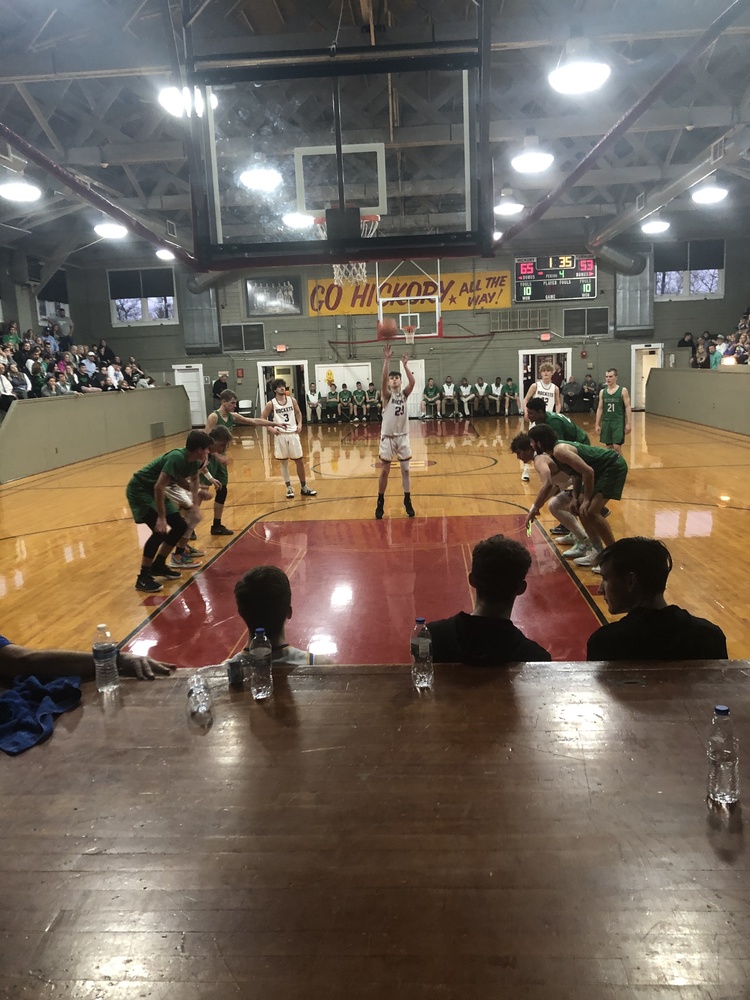 If that sounds like the script of a movie, it is – in a way.

The Rockets boys and girls teams played Fayetteville – also the Rockets – in a doubleheader at the Hoosier Gym in Knightstown, Indiana, about 38 miles east of Indianapolis. The gym was the filming site for the 1986 movie “Hoosiers,” about a small-town high school basketball team that wins the 1951 state championship – based on the 1954 Milan High School team that won a state championship in Indiana’s then-open state tournament.

After learning that Goshen and Indian Hill had played in Knightstown last season, CNE staff decided to take their teams there.

“With the five seniors coming back I thought it would be a nice experience for us all to go up and have a bonding experience, plus I love the story and I just thought it would be really cool for us to do it and he reached out to Fayetteville and kind of went through the logistics of it and it worked out great,” girls coach Doug Portmann, an admitted big fan of the movie, said.

Those five seniors – Bockman, Makayla Drewry, McKenzie Reece, Taylor Shumard and Alyssa Williams, as well as the three senior members of the boys team – Jerryd Burns, Jared Decatur and Blake King – had only passing knowledge of the movie, but are now fans. Both teams went to University of Cincinnati’s main campus, where they watched the movie a few days before the trip.

“I had never watched it. I heard of it from my grandparents. It was really cool. I liked it,” Drewry said.

Portmann admitted to being pleasantly surprised by the players’ reactions to the movie.

“It was interesting because when we saw the movie I didn’t know how they would react, if they’d be bored. It was very different graphics back then, but at the end of the movie they actually all clapped, which I was thought was pretty neat, they kind of just clapped about the end of the movie so I thought it was a good feeling,” Portmann said.

“So when they got out there I think it was a good visual to remember back to the week before and it’s fresh their mind to see the things they’d seen. It’s funny because when I told them we were playing on that court, they thought I was kidding, and they looked it up and said ‘Oh my goodness, it is the same court.’”

The same court as the movie, but not a typical court. The Hoosier Gym playing floor is 12 feet shorter than a normal high school court. There is no half-court line, but there are lines on either side of half-court that act as time lines. Teams must advance the ball past the line closest to the basket at which they are shooting in 10 seconds or fewer but once they cross the line, they can run their offense as far back as the line on their defensive end. Needless to say, that took some getting used to.

“You think you’re over but there’s still counting 10 seconds, so you’ve got to get over the line,” Bockman said.

Shumard said her teammates eventually adjusted. “Once we played on it for a couple of minutes it was easy to know where everything was,” she said.

The sidelines at Hoosier Gym are inches from a wall that borders the stands, so team benches were behind each basket.

“We had to sub from each end, instead of from each side. I sent somebody in and they would have a guy there, like a curator, and he would wave to the ref and we’d sub in from the end,” Portmann said.

CNE, as home team, had a good contingent of fans. Portmann said both sides of stands were full, and he estimated a crowd of about 1,000.

The gym, originally built in 1920, is pretty much as it appeared in the movie, with a team photo of the fictional Hickory Huskers on a wall, along with an old peach basket and a blackboard with the “picket fence” play diagrammed. Players dressed in the same lockerrooms they saw in the movie, and left a signed jersey there for future visitors.

“The lockerroom was really cool, seeing all the jerseys of the people that played there. The court was really cool. The stands. The atmosphere,” Williams said.

Players also brought home souvenirs – Hoosier Gym and Hickory High School spiritwear – as tangible memories, but the intangibles may be just as important. The girls team spent a night in a nearby Comfort Inn, playing games and enjoying time together.

“We got in a lot of bonding that we really needed, so that was great,” Shumard said.

The boys, 13-2 overall and 8-0 in the Southern Buckeye Athletic and Academic Conference National Division after a 68-47 win over Felicity-Franklin Jan. 21, have Hickory-sized dreams.

“I loved it, how a small school like that could win state. Hopefully we can,” he said.

“I’ll remember the fun we had with our team, the bonding time we got, and all getting together and talking,” King said.

The girls team is seeking its first winning season since 2005. They stood 10-6 overall and 5-5 in the SBAAC National after a 46-26 win at Blanchester Jan. 20. Portmann, in his second year as head coach, hopes to take a similar out-of-town trip each season.

“I think that builds, especially a small community like this, maybe word gets out, ‘Hey they can do this,’ and maybe we can draw other players. Our biggest challenge here at CNE is the number of kids coming out, so if we can generate some buzz that we’re doing some special things, the kids are having a good time, I think it makes our program that much stronger,” he said.