This search form uses an instant search feature. As you type, search results will appear automatically below the search field. When you've entered you desired search terms use tab to navigate through the available results and hit enter to open the selected page or document.
EDIT MAIN

After nearly a year and a half of surveying, seeking, pitching, and planning, the Mercy Health school-based health center is officially coming to Clermont Northeastern Schools.

The Mercy Health Foundation secured a grant from Interact For Health for $100,000 to build the SBHC within Clermont Northeastern High School. The Sun learned about the approval on Nov. 18.

Mercy Health Foundation is a non-profit organization that works to further Mercy’s mission of “finding new and innovative ways to deliver the best possible health care,” according to its website.

Interact For Health works in the Greater Cincinnati Region to “improve health by promoting health equity in the region,” according to its website. Particularly, in 2017, Interact for Health cited grant funding SBHCs as a priority.

CNE becomes only the second SBHC in the county after West Clermont Local School District incorporated one into its new high school in early 2018.

SBHCs are a model of primary care and behavioral care, which services both the students and staff right there in the school, but also the greater community within the district. The clinic offers a wide-range of services for those aged infant through senior. Services include physicals, chronic disease management for issues like asthma and diabetes, vaccinations, health screenings, and so on.

TJ Dorsey, behavior, dean of students at CNE, explained the process of how the district got to this point. He said it started in the spring of 2018 with a survey about the district’s “openness to school-based health care.”

From there, Dorsey said they went to Columbus in the summer of 2018 to learn more about school-based health care, and then upon returning, they sought partnerships in the area to work with them on bringing an SBHC to the district.

“And that’s really where our meeting with Mercy went really well,” he said, of a September 2018 meeting. “It was really great to have a lot of interest from Mercy, in particular, about this opportunity for our kids and our community.”

The SBHC would go in at the high school where two unused home-economic classrooms used to be, which also situates it in the middle of the district’s campus, providing easy access for the middle and elementary schools, Dorsey said.

After a pitch to Lisa Sweeterman, director of sports medicine partnerships, school-based health services and integrated behavioral health services at Mercy Health, and the rest of the team, Mercy began exploring the possibility with an architect to see what the build-out would cost in October 2018.

Dorsey said Spring 2019 is when they met with Interact For Health, which also came and saw the site.

Sweeterman said as soon as CNE laid out its need, it was “very apparent that this was the perfect location for a school-based health clinic.”

She also explained that the community can develop a relationship with the nurse practitioner to deliver the primary care available.

Sweeterman said they know how the SBHC can change a community, and how the nurse practitioner becomes a part of the community.

Offering behavioral health services is new to the SBHCs as well, Sweeterman said. It’s something Mercy rolled out last month.

One way the SBHC can change a community is through tele-services: providing iPads to families so a child can have a virtual meeting with a child psychologist.

Just as with primary care, there is limited access to behavioral health services and psychologists within the district, so providing virtual visits fulfills a “huge need,” Sweeterman explained.

The SBHC for students would work on a referral basis: the student would first see the school-based nurse, who would then refer them to the center for further treatment. Sweeterman explained that the nurses know those students best. They also try to get the consent to see the nurse practitioner ahead of time, which includes insurance information.

“That’s the first line of triage,” she said.

That’s also necessary because the SBHC does bill out for those visits like any other primary care facility. The difference, Sweeterman said, is that they aren’t “shaking down little Johnny for a co-pay.”

“So we just want to make sure the right kids are getting into us so the parents don’t get a needless bill,” she said.

Making changes ahead of the SBHC

CNE has also been taking action to reduce the build-out costs. For example, Dorsey said during Christmas break in 2018, the janitorial staff demolished the space, leaving only the floor and the walls in the room. An additional sidewalk was also put in from the parking lot to the back of the building for people to make entrance into the building.

Dorsey said they’ve also written a grant for security cameras, which would be placed on the outside.

These improvements also enable the SBHC to serve both students and staff, and the community without blending the two for safety reasons.

Any door that leads from the clinic to the school would automatically lock down and be pass-protected.

Sweeterman said there are a number of reasons to put the SBHC in the district. Among those reasons is to limit the number of absences and lower the costs for parents who otherwise were using Mercy Clermont emergency room services as a quasi-primary care physician.

“There’s so many working parents nowadays that parents can lose dollars and can lose jobs just by having to take a child out of the school, say to run them over to the primary care physician, or the urgent care, or the Little Clinic, things like that,” she said.

The SBHC allows parents to keep working. Additionally, Sweeterman said the earlier chronic disease issues, like asthma, or mental health issues, are detected, the “healthier a community is going to be.”

Dorsey explained more about the absence issue, noting that when the district looks at ways to measure success, what they seek to do is remove as many barriers as possible.

“And if you look at a map of Clermont County and you start putting in health care services by school districts, the only thing our district has in it is a dentist office. There is no doctor’s offices, there’s no emergency rooms inside of our district,” he said.

While Mercy Clermont hospital isn’t too far from the district, but Dorsey explained that those with low transportation, it can make it challenging for parents to get their kids the “care that they need and deserve.”

“And you shouldn’t be punished because of your geographical location or your income for your accessibility to health care, so we felt like it was an obligation of us to go out and explore this option to provide as much of a service to our community as possible, and school-based health care was definitely the vehicle we thought we could help achieve as much as possible for our kids,” he said.

Dorsey said they’re also working with Fitzgerald’s Pharmacy in the village of Williamsburg to help deliver whatever medications are prescribed.

“It’s really hard for students to be able to focus on the academics and learning if they have an ear infection or have a hearing issue that’s been identified or vision issues or maybe it’s blood pressure issue. There’s so many different illnesses that kids can have,” he said.

Dorsey said they had kids who didn’t have access to treatments for those issues, and as such, were having extended absences. Attendance is a big factor on graduation rates, college readiness, and workplace readiness, he said.

“Every hour does count when it comes to instruction,” he said. “And having a clinic on campus would be huge for us.”

Dorsey said the collaboration with Mercy Health is a “dream come true.” He said looking back three years ago, such a project coming to CNE wouldn’t have seemed possible.

“It just shows that time in and time again that Clermont Northeastern is really pushing that envelope of innovation all the time out here,” he said.

As the name implies, school-based health centers are health centers located in school buildings. They offer a range of health services. All SBHCs funded by Interact offer physical and behavioral health services. Several centers also offer dental and vision services. These comprehensive health centers now number seven, and more open every year. What’s more, SBHCs aren’t just for students. School employees and members of the community can use them, too. SBHCs can serve as a health hub for the whole community.

What are the benefits of SBHCs?

SBHCs offer communities an added resource for health care. When students can be treated without leaving school, they can quickly return to the classroom to continue learning. Parents don’t need to take time off work or arrange transportation to doctor’s appointments. Interact’s focus on families and communities with limited resources improves access to health care for the people who need it most. Today, some 50,000 students in Greater Cincinnati have access to 38 school-based health centers, and the number continues to grow. 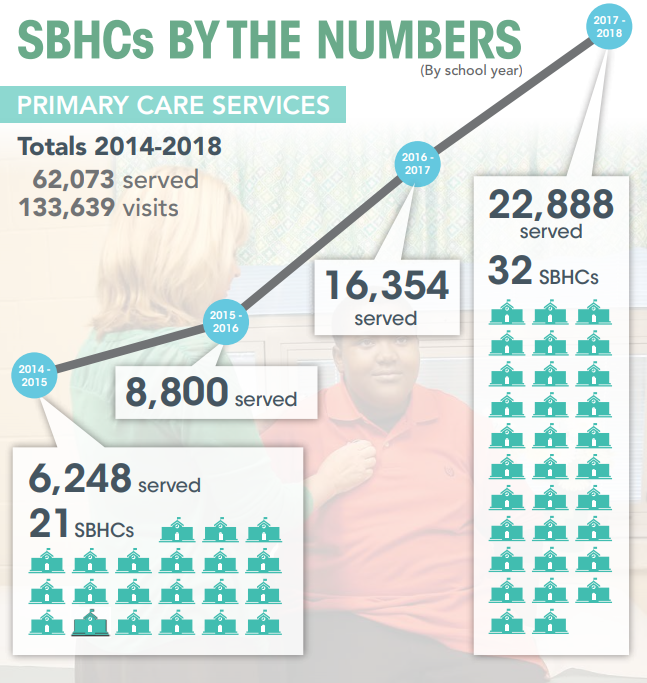