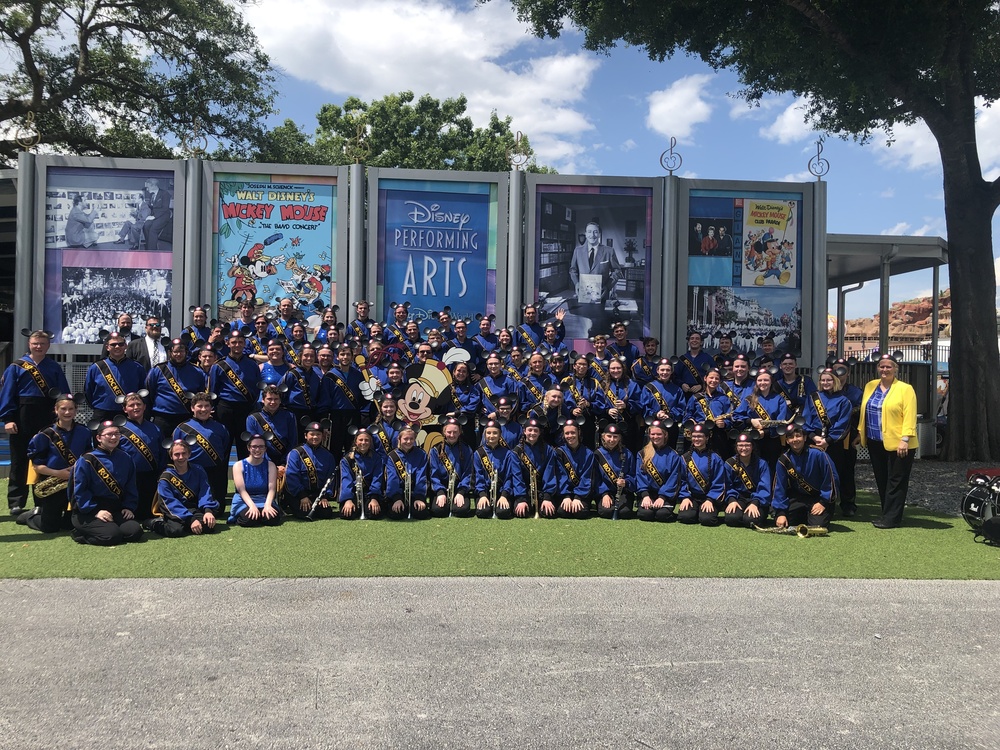 Apparently, there’s no such thing as too much Disney.

Less than a week after returning from their biennial trip to Disney World in Orlando, members of the Clermont Northeastern High School music program were in the band room on a Monday morning – watching “Aladdin.”

This was the sixth time band director Chris Moore has taken a group to Disney. The group of 95 (84 students and 11 adults) departed May 8 and returned five days later. While band members have mastered the routine, the thrills and memories are new every time.

Moore now plans the entire trip himself, which he says saves money and enhances the experience.

“So the first time we took the trip we had one less day than we do now, so we were kind of cramming everything in, and we were at Epcot, and we got on the bus at Epcot to drive home overnight, and it rained like four hours that we were there, so everyone was soaked on the bus. It was a like a downpour. You couldn’t open up and get the luggage out because it was soaked, so I had kids sitting on their band uniforms on their ride home. It was one bus. We had one bus. Now we’re taking two.”

The contingent left after school May 8, driving through the night. As is the case with most vacations, the travel to Disney is an event in itself. Junior color guard captain Madelyn Stephenson has now made the trip twice.

“The ride down is always the fun part because you’re going to Florida. You’re looking forward to the trip. It’s always really funny because there are people on the floor sleeping. There are people with their feet up in the air. It’s always fun,” Stephenson said. “We play games on the bus, watch Disney movies. Getting to get close to people you’re not normally close with. A lot of people in band kind of stray away from each other in school, but on this Disney trip you can really watch people connect and bond. New friendships are made. On the way back it’s a little rough because you’re on your way back from Florida, back to the cold Ohio weather, but overall it’s worth it. The trip is way worth it.”

Stephenson said the experience of going as a freshman helped her this time, as she was able to lead some of the younger members.

“I thought it was awesome, because getting to go my first time, I was a little scared, because it’s a new trip with the band, and going the second time, it was way easier, knowing the ropes around, being able to be that leader to show people around,” she said. “It’s an amazing experience to be able to march through Disney, watching the Magic Kingdom pass by as you’re marching and everybody singing and dancing as you’re playing. It’s crazy. Getting to meet new people. Being a cast member of Disney, because as you march in the Magic Kingdom, you get to be a cast member, and they treat you like royalty. It’s just amazing.”

Junior Charles Kent plays bass drum, and was also making his second Disney trip with the band. He talked about the mood on bus going to Florida.

“We did sing a lot because someone would just start singing and everybody would join in. It really kept us all happy,” he said.

“I especially love getting out of Ohio because the weather is really cold here. I had fun going to Hollywood Studios, I got to meet Chewbacca and Kylo Ren and BB8, stuff like that, and I got to build my own light saber, which was a lot of fun. I did want to see the Phantasm thing, but we missed it because of thunder in the area. A fun ride that I did was Rock ’N’ Rollercoaster, and I had a lot of fun just walking around with my peers and stuff, just hanging out with them, because I usually don’t get to see them during the day.”

The trip is equal parts “work” and fun. When the group arrived in Florida, they went to Blizzard Beach water park. The second day began at Animal Kingdom, as they waited an hour and a half to ride Avatar: Flight of Passage.

“We were there before the park opened, we still ended up waiting like an hour and a half. It was a really cool ride. We did that and then the choir performed at Disney Springs that evening.” Moore said. “The next day, at Epcot in the morning, the kids got to do that World Showcase part, where they have food from different countries. The band went and did a workshop (at Disney Performing Arts, a backstage area) where we were sight-reading music. They performed, at the end we recorded some of the background music from ‘Moana’ and I have a recording of that, with them playing the music for the images there.”

The trip concluded with a performance at Magic Kingdom, as the band marched in a parade.

“It was really hot. An afternoon parade there, and it rained right before we started, so it made it humid also,” Moore said.

The band plays both Disney tunes and songs from its standard playlist, Moore said.

“I want to do the best to showcase our kids and they’re going to have a good experience that they remember forever. We march them down around the castle playing ‘Fireball,’” he said.

One song they didn’t play – “Duel of the Fates” from “Star Wars.” Moore, an acknowledged ‘Star Wars” fan, said he was given the score at the workshop and was initially excited at the prospect, until …

‘We’re flipping through there, and I’m like, ‘I’m hoping we get the ‘Duel of the Fates’ from ‘Star Wars,’ because I remember at the beginning there were these awesome power chords, and then I turn the next page and there’s all these crazy woodwinds playing, and I’m like, ‘We should not play this one.’”

This year, the CNE contingent stayed at Disney’s Pop Century Resort. Moore tries to keep the cost at $950 per person, with band boosters helping out when needed. Band members raise money through fundraisers, including parking cars and working concessions at the Clermont County Fair, as well as other events. They will soon start the process for the 2021 trip.

“I feel like they did a great job performing this year. The workshop was cool. That was really different. I think they were really excited for it. I’d like to do it again because it reinforces a lot of the things that we talk about that maybe the kids don’t always pick up on … it’s just Mr. Moore talking …” Moore said.

For Stephenson, who plans to join the Navy after high school, her final Disney trip will be memorable for another reason.